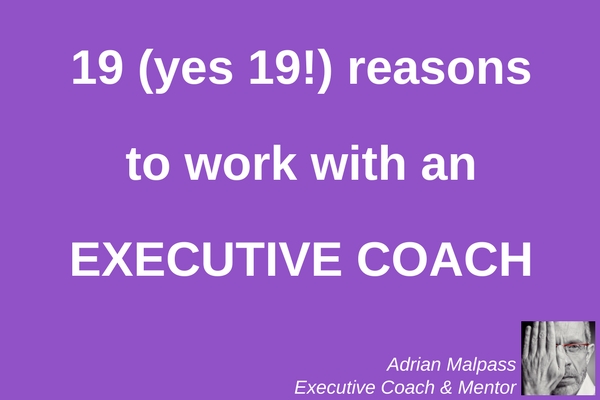 As a professional Executive Coach and Mentor, probably the one question I am asked most often is, “What would executive coaching do for me and my business?”.

Well, to help answer that question, here’s a simple list of just some of the ways executive coaching can make a difference to you, your career, and your business:

Remember, a professionally qualified and experienced Executive Coach possesses an extensive range of tools, experiences, and abilities that are all specifically focused on working closely with you in delivering the unique solutions that move you forward with clarity, focus, direction and motivation.

N.B.: one recommendation I would always make is for you to always, always, always choose an Executive Coach who is genuinely professionally qualified. Take a look at my blog article ‘Choosing the best business coach for you’, which contains tips for choosing a great coach. 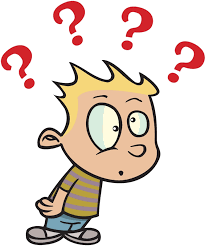 How often do you read something only to find yourself trying to work out what the author is trying to explain?

Have you fund some writers write in such a complicated style that you struggle to understand what they mean?

Or, potentially worst of all, you lose interest and stop reading any further?

Yet, the ability to communicate effectively is arguably one of the most important skills to have…in all walks of life!

First of all, let me emphasise that I am no ‘writer’ by any stretch of the imagination! In fact, far from it! Given the choice, I much prefer working with numbers than words.

But, I do have to do a lot of reading in my work: articles on the latest developments in leadership, executive coaching, business psychology, and emotional intelligence for example, plus a wide range of, often lengthy, client documents.

So, I get a fairly good opportunity to experience many different writing styles, and have learned that effective, engaging communication is all too rare.

All too often, I end up reflecting on what I have been reading, and realising how I struggled to understand its content, or how I lost interest in it, or how the information was presented in just too complicated a way.

The end result? The writer doesn’t get their ‘message’ across, and the ‘reader’ doesn’t retain any information (or, frequently, doesn’t even read far enough through the document to reach the information).

I firmly believe in keeping things simple, so simple it is. Simple works!

Probably the easiest way I can explain this is by using my very simple ‘formula’ (which I have mentioned before in blog articles). When it comes to communication:

It works! Trust me!

Keep your communication simple, and keep it very clear, and it will be effective.

Even better news is that you can apply this simple ‘formula’ to almost any aspect of your work or personal lives where communication is needed.

But, this simple approach is nothing new.

Back in 1986, professional excellence expert and professional coaching originator Timothy Gallwey developed this:

The performance of any ‘system’ (examples include: communications, or a machine, or a business, or even a human) is equal to its potential (which is always 100%) less the influence of the things that interfere with (and therefore reduce) that potential.

So, there you are!

If you really want your communication to work, keep it simple, keep it clear, and it will be effective.

How much does the design of the world around us influence our decisions?

What would you say?

After all, everything that isn’t natural is designed, so we are surrounded by (for want of a better word) ‘unnatural’ influences, whether we like it or not.

Here’s an example to help explain what I am talking about:

Our Driving Licences include a photo of the holder, and have to be renewed every 10 years. At the time of renewal, we are also given the option to enrol on to the Organ Donation Register.

Take a look at the graph below. It shows the rate of organ donation enrolment at Driving Licence renewal, for a number of European countries: 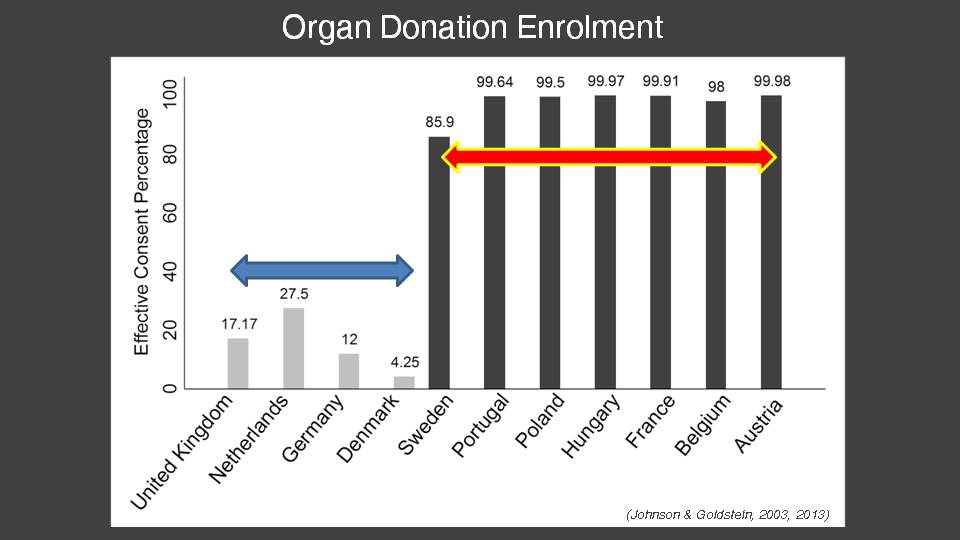 You will have spotted that the differences between the groups are significant. So what is the cause?

Could it be, for example, to do with an individual’s beliefs, or could it be for cultural reasons?

After all, by the time we donate our organs, we are no longer ‘here’ to be concerned by it.

Even countries that you might argue are culturally similar have very different enrolment rates:

and, depending on your view of cultural similarities across Europe:

But, what has caused these differences?

Well, it turns out that it was almost entirely caused by the design of the renewal form.

The group on the left, with the low level of organ donation enrolment, had a form which included a box similar to this:

As we have all done when filling in a form, they didn’t check the box, so didn’t join the Register.

The group on the right, however, the group with much higher enrolment, had a slightly different box on their form. Something like this:

Just as the lower enrolment group did, the people completing this form still didn’t check the box, but, in this case, they joined the Register!

It really was as simple as that!

But, why didn’t they check the box in the first place?

Could it be because they considered the decision to enrol as, for example, trivial, or too easy, that it was simple, or could it be that they didn’t really care that much about it?

In fact, it was the opposite of these things.

They found the decision to be extremely important, very difficult indeed, highly complicated, and they actually cared so much about it that they couldn’t actually decide on which decision they wanted to make.

As a result, they just left it to the ‘default’ decision that was being made for them…and how many of us have done exactly the same?

So, there you are. Design can, and frequently does influence our decisions!

Along with a number of other influences (which I shall keep for future blog posts), our intuition, which we rely on heavily when we make decisions, is being led astray in a consistent, predictable, and repeatable way by the world around us, so much so that we do not always clearly understand the decisions we want to make.

How often do you look at the choices in front of you, and think, “What’s the point of that (option)?”

We come across ‘zero’ options – the ones that obviously nobody would choose – surprisingly often.

But, what is the point of them? If they really are ‘useless’, what are they doing to our decision-making?

Well, take a look at this subscription offer run by The Economist in 2009: 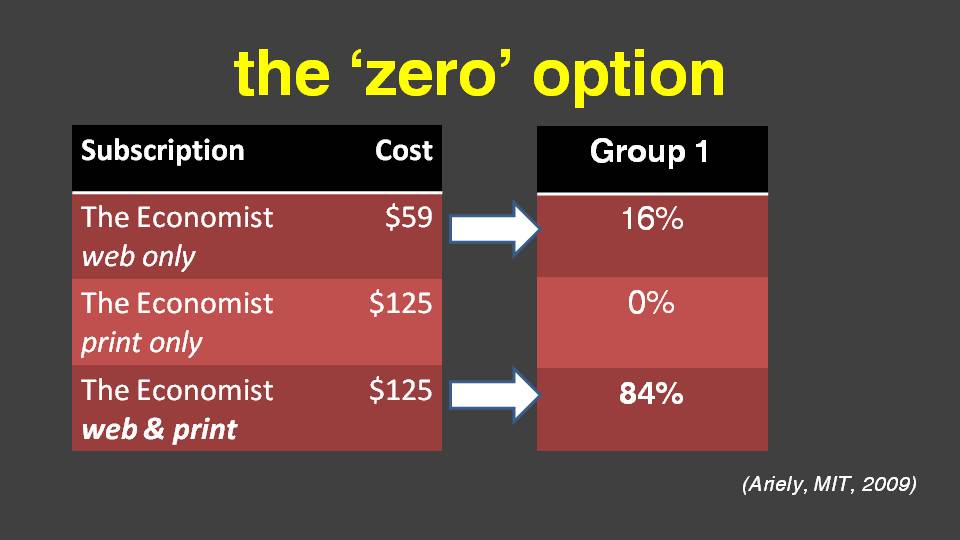 In a controlled test, 100 MIT students were asked to express a preference – see the results shown above.

So, if the print only option is a ‘zero’ option (i.e.: nobody chooses it), what is the point of including it in the list?

Or, to put it another way, what would happen if it wasn’t there?

So, the print only option was removed from the list and another 100 MIT students were asked to choose from the revised list, with the following results: 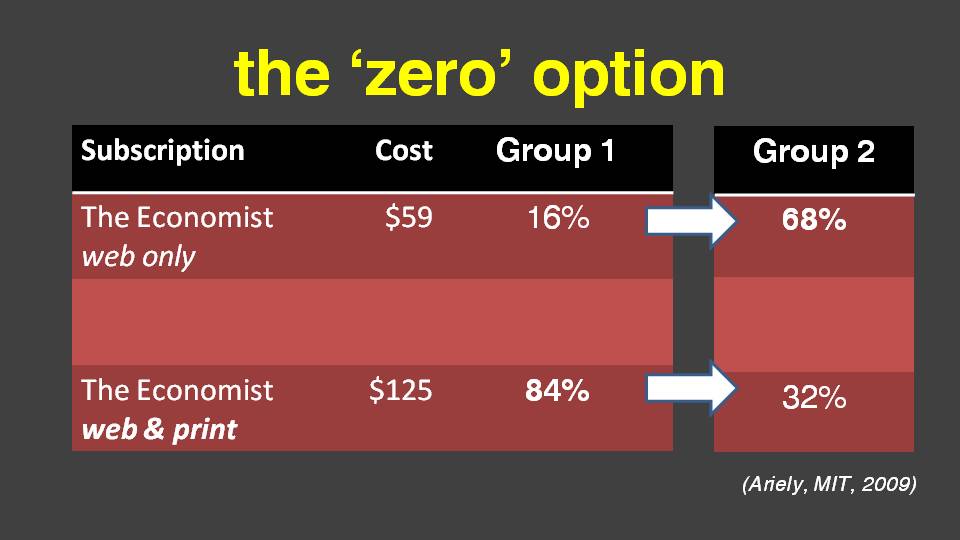 As you can see, when there were only two choices, what was originally the most popular has become the least popular, and vice versa, meaning the ‘zero’ option was actually having an influence on the choices the students were making.

In fact, it wasn’t actually a ‘zero’ option at all. Just because nobody chose it, doesn’t mean it had no influence.

What was happening was the only ‘zero’ element of that option was that nobody chose it.  When it was present, it’s influence on the choices that were made – predominantly cognitive decisions – was important.

What it was actually doing was encouraging the readers to choose the ‘best nearest’ option that was closest to the (obviously) ‘zero’ option. In other words, it helped the readers to make their minds up!

So, next time you see a ‘zero’ option, or if you decide to include one in your own proposals, remember that they’re far from useless after all! They actually help the reader make a decision.

A thank you: I’d just like to give a special mention to Dan Ariely, Professor of Psychology and Beha