1) They don’t like being with large groups of people. WRONG!

On the whole, introverts are as much ‘people people’ as extroverts. They are quite happy to be among large groups of people.

The key difference is that introverts tend to chat with one or two people at a time, and tend to do more of the listening and less of the talking.

Introverts generally aren’t big fans of ‘small talk’, and tend to only speak when they have something valuable to say.

The upside of making the effort to get to know them?

They make very loyal, reliable and trustworthy friends who are often great sources of advice, guidance and knowledge, as well as exceptional listeners who have a broad and deep understanding of people.

Some of the best public speakers I know are introverts.

Contrary to popular belief, introverts are often quite happy to stand up in front of, frequently, hundreds of people and give exceptional talks or presentations that are insightful, informative and funny too.

Introverts also tend to develop good reputations as speakers and as ‘experts’ in their chosen fields.

3) Introverts are reclusive, distant and difficult to get to know. WRONG!

If you’re finding this is the case, just start engaging them in a different way, and start asking the right questions!

Careful and considered in their judgements? Almost always!

To prove the point that introverts aren’t ‘geeks’, here are a few famous ones:

They instinctively make well thought through, well balanced, and highly respected decisions because they have a thirst for knowledge and for doing things ‘right’.

As such, they quickly earn the enduring respect and loyalty of those around them, and introvert led teams, businesses and other organisations tend to be among the best in delivering the highest levels of customer satisfaction, and employee satisfaction too.

Remember introverts actually deeply enjoy being with people. They just tend to do it a little less than extroverts, and seek peaceful environments in which to ‘recharge their batteries’ (which does not necessarily mean time alone).

Here’s a graphic which may help: 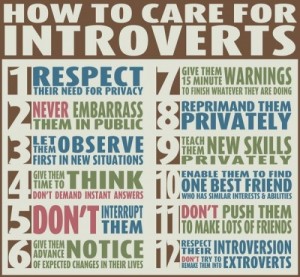